No extended time living in Europe is complete for most Americans without the requisite pilgrimage to the beaches in Normandy and an homage to the day the tide turned in the Allies’ favor during WWII. There is almost a biological need to honor the lives that were lost in pursuit of that goal. 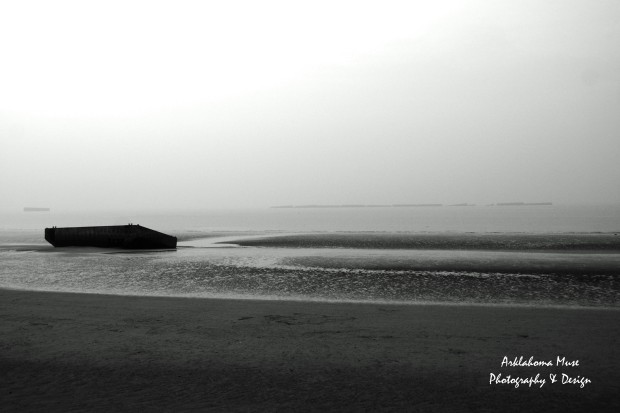 The ride up from Giverny to our overnight stop was rainy and bleak (but not without some amazing sights – I am determined to find those castle ruins that rose up out of the cloudy mists in front of us and disappeared as quickly as my children’s interest and attention in such things, lol). We arrived in Arromanches-les-Bains shortly before dusk; just enough time to take a quick walk down to the beach to get our bearings. 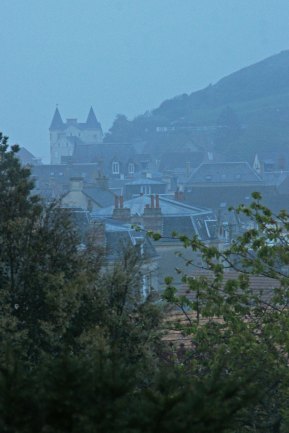 The town of Arromanches-les-Bains

This small, picturesque town was the site of an artificial harbor created by the British in the aftermath of the storming of the beaches as the deeper harbors were still under German control. Giant, floating, concrete blocks were towed just offshore to created a pier for off-loading all the gear and equipment needed to continue the fight against the Nazis. You can still see a great deal of the blocks floating in the bay and a few that are beached on shore. 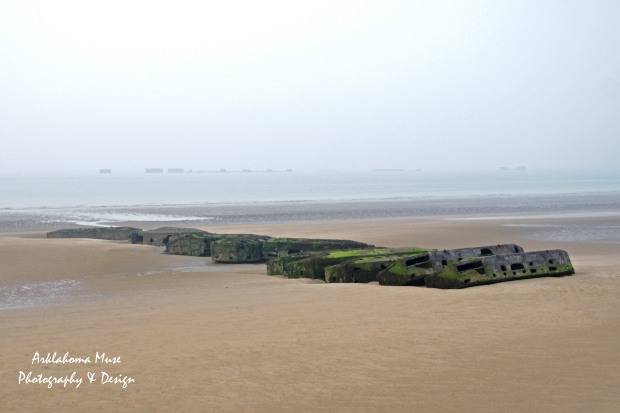 Remnants of the port

The next morning, after making the mistake of not eating breakfast at the hotel (always take the hotel breakfast in small town France as there are few if any breakfast options on the local economy), we took a quick stroll through the town. The weather was equally as dismal as the day before, which given the theme of the day’s visits, seemed quite fitting.

Footie on the Beach

First we headed to the German batteries at Longues-sur-Mer. Europe is riddled with old bunkers and reminders of various kinds of World Wars I & II. It is a constant reminder of what happened and what was almost lost. These concrete bunkers are still in amazing shape, showing just what our soldiers were up against in those days and the gravity of the situation comes through while exploring the area.

While taking in this particular site, you can’t help but contrast it with the beauty of the coast and the lush farmland, enveloping what was once hell bent on destroying the peaceful nature of this place.

From battlefields to farm fields

View of Arromanches-les-Bains from Longues-Sur-Mer

What American hasn’t heard about the American Cemetery in Normandy? It’s an absolute must see while in the area. While we didn’t walk through the museum (one kid was sick, waiting in the car, and the hubby forgot he had a pocket knife on him), but just walking through the cemetery and seeing row upon row of graves, all from one conflict, weighs heavily upon the heart.

View of Omaha Beach from the American cemetery

All are equal in death 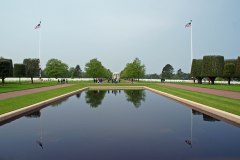 After our quick visit to the cemetery, we drove over to Omaha Beach. There on the sand is the Les Braves sculpture, commemorating the Allies that landed there. To me, it resembles a collection of odd swords pointed in different directions, maybe as a way to represent the danger and death that those poor soldiers were plowing into. These days the beach has reverted back to its beautiful nature, the scars from that conflict all but erased from view – at least the visible ones.

Photographically, this day taught me that I still have a lot to learn about photographing on dark, cloudy, and misty days. I can’t say that I captured any mind blowing shots, but I also can’t say I regret our stops on that day. Each one hammered home the intensity of that time and taught a new generation of my family more about the darker side of humanity that we hope never surfaces again. 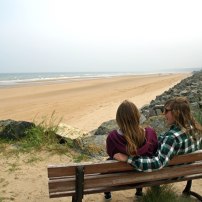 You can’t pick your friend’s nose, but your sister’s… 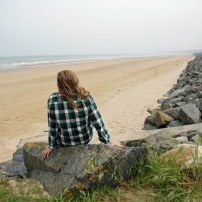 One interesting thing about having a high school student in Europe is getting to know her friends and realizing that the reminders and memories of the great wars are still very much in the forefront of the minds of these kids. Every conflict engenders a bit of anxiety and there is an awareness about how fragile peace and alliance can be. I just hope that while the world hasn’t forgotten the sacrifice of the soldiers, that they are exploring and remembering just what is was that led to the horrors of World War II with an even greater zeal. I’m not so sure any of us are. 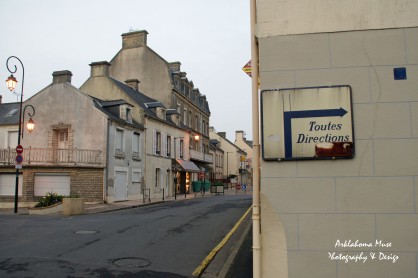 All Directions – How’d we get lost, again?

P.S. There are tons of museums in the area and I’m sure that WWII and military buffs would have a great deal of fun wandering through them. But, as I’m sure you have guessed by this point, we aren’t really a museum family (that’s something I do when I don’t have to drag an entourage around with me). One museum we DID visit on a different visit however was La Coupole in Wizernes, France. Wow! It’s an eye opener on just how close we were to losing the war. The storming of the beaches of Normandy couldn’t have come at a more fortuitous time, prompting the Germans to shut down the rocket factory that would have changed history forever.

This site uses Akismet to reduce spam. Learn how your comment data is processed.

© Brandy C Herren and Arklahoma Muse, 2014. Unauthorized use and/or duplication of this material without express and written permission from this blog’s author and/or owner is strictly prohibited. Excerpts and links may be used, provided that full and clear credit is given to Brandy C Herren and Arklahoma Muse with appropriate and specific direction to the original content.

My rocks are the memories from different adventures. I thought I would just leave this bag here.

Plowing through Life in the Country...One Calf Nut at a Time

A story of love, life, food and travel!

Life of Bear and Dragon

A beautiful adventure in Brussels

The Adventures of a Londoner Living in Santiago, Chile

Comments for One Positive Blog
Motivating Giraffe
Art of the internet

If I knew then what I know now